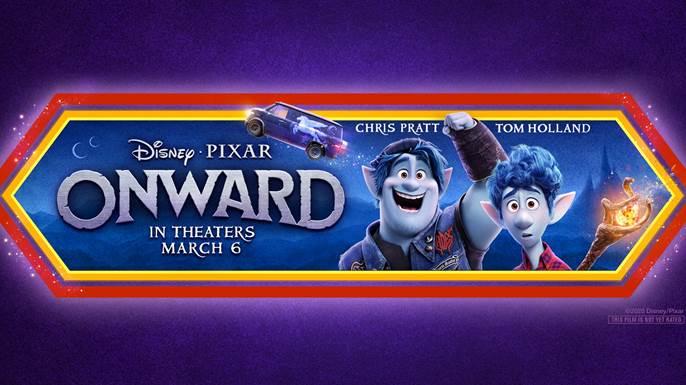 I had the opportunity to see Disney-Pixar’s Onward this week and I have to say that I enjoyed it ( I also admit to shedding a few tears at the end).

The story is about two teenage elf brothers (voices of Chris Pratt and Tom Holland) who embark on an extraordinary quest to discover if there is still a little magic left out there and in the hopes of spending one more day with their late father. while the plot is somewhat typical, encountering all sorts of obstacles on their adventurous journey, their is more to Onward than the simple story.

First off, the main characters are teenagers, and I LOVE the teenage interaction with their Mom. We also get insight into the insecurities shared by so many teens and how they often try to resolve these issues on their own, in their own way. Onward is a story about finding your inner strength, finding yourself and realizing the gifts that are right in front of you when you stop focusing on that which is not. That’s where the magic happens.

I don’t want to spoil the film so I’ll just add that I think it especially speaks to Tweens and teens but that most kids will still benefit from the messaging. I also noticed subtle messaging around inclusivity.  I say subtle, because it was not something that was a focus, and the fact that it wasn’t a focus sent the message that certain differences are nothing to focus on, people are just who they are living their lives as they do-‘almost a subtle message of ‘there’s nothing to see here…move on’ ( or move onward, as the case may be;) ) Although I am mentioning this, the messaging is so subtle that you may not even notice it.  That said, I did.

Finally, a little heads-up. The fact that these brothers are trying to reunite with their father is not a background story, it is front and centre. If your child experienced a loss, especially if the loss of a parent, you may wish to pre-screen the film to gauge if it is ok for your child.  It’s not that the movie is harsh in any way- quite to the contrary, I think the messaging around losing a parent is on point. I suspect the movie will resonate with many kids who have lost a parent or another loved one. That being said, different kids take things different ways so I am putting in this note and, as I always say, you are in the best position to know what is and is not a good fit for you child.

Disney-Pixar’s Onward opened in theatres on March 5th. If you haven’t seen the trailer, here it is:

Wishing you a great weekend:)