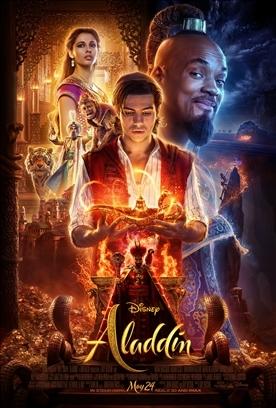 I was treated to both the media screening and the advance screening (which I attended with my daughter) and I have to tell you that I loved it even more the second time around.

It’s got it all: Romance, magic, music, nostalgia, talent…and something else…chemistry.

I have to say that while I expected the movie to be a hit, I did think that Will Smith would be the one to ‘carry it’ so to speak. I was completely wrong.  While Will Smith was excellent as the Genie,  Naomi Scott was also spectacular as Jasmine.  Not only does she have an incredible voice, but her ability to express all of Jasmine’s emotions through her eyes and body language was just amazing. Mena Massoud has the perfect boyish charm you’d expect to see in Aladdin and embodied his role to perfection. Most importantly The onscreen chemistry the two of them was incredible.  The truth is that the chemistry between all of the characters was incredible.

Marwan Kenzari was terrifying in a very creepy, snake-like way as Jafar.  Some of the supporting actors were just as key to the success of this film as the leads. Nasim Pedra who plays Dalia added so many laughs to the movie and was fantastic and even Navid Negahban was the perfect Sultan. The only role that I think could have been ‘pumped up’ a little more was Iago, the bird. he was there, but I guess I expected to see him more. I didn’t really miss him that much 😉

As for the storyline, it is somewhat adjusted but I personally appreciated the adjustments. The musical performances are  excellent and bring back all of the nostalgia of the original animated version. That said, I will mention that there is some  funky editing that happens in some of the scenes. It’s not bad and I suspect that Disney did this for effect as well as to keep the movie pithing a certain time frame. While it will likely be appreciated by many, I personally prefer to watch these scenes as though I am watching every single moment as it happens in the actual speed that it is happening in.

Speaking of musical performances, however, there is the addition of an exceptional song that I love. By the time you are reading this, you may have already heard it playing on the radio, but in case you have not, I will not mention it;) I will only say that it is a beautiful song with very empowering lyrics.

On that note, Aladdin does serve up a healthy does of female empowerment and I’m all for it.  It is done tastefully and gracefully and I think it serves up messages that our young men and women need to hear. While if my sons decide to see the movie, they may complain that this is yet another time where Disney has to show how the princess can hold her own without the prince, I happen to love the way it is done and give Disney huge credit for empowering all of the world princesses.

What else can I tell you?  Stay through for the finale in the credits at the end for a cute dance performance that will make you smile and Will Smith may evoke a feeling of his inner ‘Fresh Prince’ … Habibi 😉

Enjoy the movie, I did…TWICE 🙂