Unlike half the planet, I actually did not know of Noises Off prior to hearing that it would be playing at the Segal Centre for Performing Arts.

Normally, prior to attending a show, I do a little research to find out what the show is about. Unfortunately, I didn’t really have to time to check it out before arriving. I was just really happy to be back at the Segal after missing the last few productions due to my crazy work schedule over the last few months.

My hubby, who has agreed to be my date for the evening, went in just as blindly as I did but grateful to be on a date night for the first time in almost two months 🙂

The theatre was packed.

The play began and within what was definitely under 2 minutes we had our first chuckle. We then chuckled some more. It didn’t take long to realize that what we were watching was a play about the making of a play ( that is not going very well). Once that was established, the the actor-director banter (and attitude), the blunders, the relationships between the characters and the personality of the characters I found myself laughing more and more…as was the audience. I was a bit concerned about my hubby because while he was clearly liking the play..he wasn’t laughing quite as loudly as the rest of us..until we hit Act 2.

Act 2 had the entire audience roaring in laughter, my hubby included 🙂 We just could not stop laughing.

What was so funny? We got a peek at what is going on ‘behind the scenes’ of the production – We literally go backstage, but we are also privy to the personal conflicts and love triangles going on…and yet the show must go on.

There was a ‘fight scene’ where there was so much going on at the same time that anywhere you looked on stage, you would be witnessing a different interaction that would make you crack up laughing. All I can say is MEGA KUDOS to Fight Director Jean François Gagnon for choreographing that scene…Wow. Just Wow.

For those of you who are unfamiliar with Noises Off…allow me to elaborate that I don’t refer to choreography of a dance, as Noises Off is not a musical. It was just the entirety of the scene ( which lasted a long time)…You’d have to see it to truly appreciate how brilliantly it was done. Hats off to you, Mr. Gagnon! 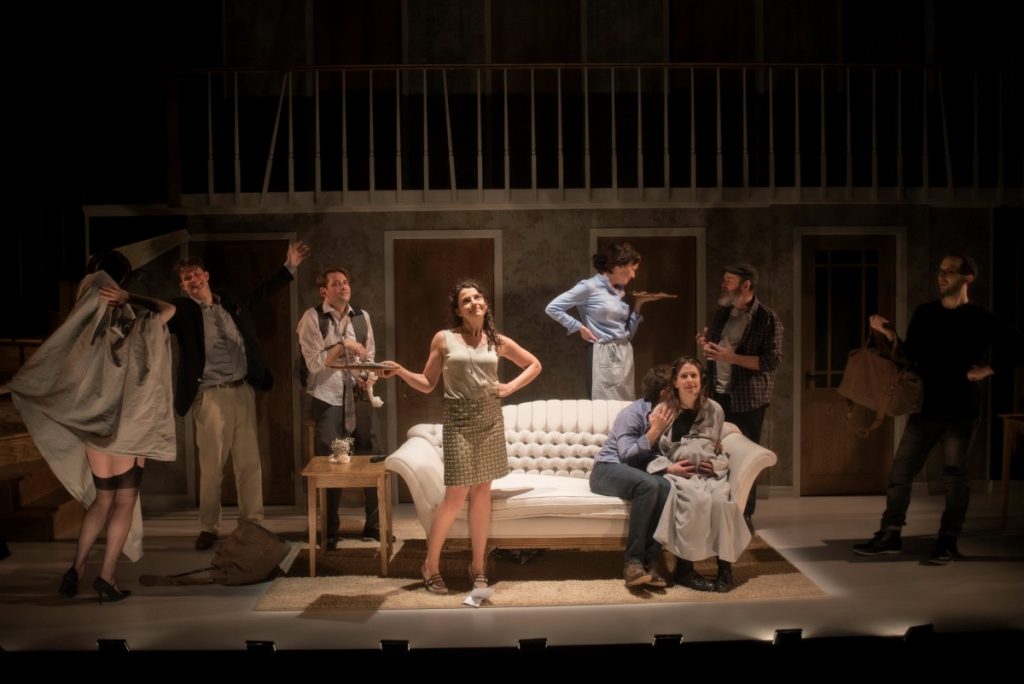 As for the cast, what can I say?  I couldn’t help but feel that the energy and the chemistry between them is what brought the whole show over the top. It was this energy and chemistry that brought it all together so brilliantly. Amanda Lisman gets special mention for carrying off Brooke’s hilariously exaggerated persona so well…It was just FANTASTIC! (*INSERT shimmy shimmy HERE* )…You’ll have to see the show to appreciate that one 😉

I have to add that while we didn’t see a whole lot of Michael Musi, his contribution towards the end of the show brought the house down!

Don’t let the fact that I am not mentioning each actor by name mislead you- each and every one of them was outstanding.  and contributed to what I will oddly call a symphony of cacophony.

Want a sneak peek?  Watch the trailer below:

Thinking about going?  Tickets are available for purchase on the Segal Centre’s website by clicking here.

I’m going to add this WARNING here: Act 2 is not short…and it is hilariously funny.  I strongly recommend visiting the restroom right before returning to the theatre from intermission 🙂

Seriously, if you can do it (and if there are still tickets available!) Go see Noises Off at the Segal…and get your laughter on 🙂

How Pennies & Quarters Make Sense (and Save Dollars!) at Disney

Disney Land & Sea : We’re Back and Have SO Much To Share!