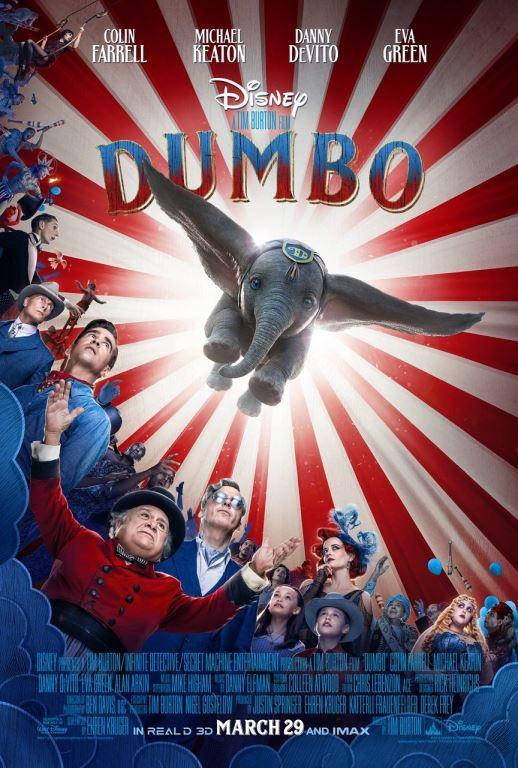 My daughter and I were treated to an Advance Screening of Disney’s ‘Dumbo’ this week and while I was looking forward to seeing it, I’m not going to lie that I was really wondering how my beloved Disney would pull off a flying elephant in live-action mode. Ironically, the question I might have asked was: ‘Is ‘Dumbo’ gonna fly?’ and following Wednesday night’s screening, the answer is ‘Yes, it does’.

This wasn’t a show-stopper type of movie. It’s not a musical and I did not leave the theatre with my jaw on the floor and my head spinning in the clouds as I did after seeing Disney’s ‘Beauty and the Beast’.  What I left with was a serene feeling and the words that came to my mind were that ‘The magic lives on‘.

Dumbo is a beloved story from which there are lessons to be learned, and this new version still fills that role. What has changed is that Walt Disney Studios has literally brought the story to a different level by bringing it to ‘life’ in this live-action version.  When I watch movies, I am sometimes amazed by how truly talented actors can communicate with their eyes – in those moments, they are living and breathing their character. Disney’s animation team somehow managed to make Dumbo (and Dumbo’s Mom) communicate with their eyes. It’s actually pretty awesome when you stop to think about it. When you see the movie, you will see what I mean. My hat goes off to them for their work on this film, because I was really quite amazed by it…as I was generally speaking by the elephants themselves.

As for the real-life actors: Danny Devito is the perfect Max Medici and Michael Keaton does well in his role as the sketchy V.A. Vandemere.

Disney’s ‘Dumbo’ is a beautiful family movie that will definitely be appreciated by the younger set , although you should know that there are some scenes involving fire and some degree of violence that can be scary for young kids. Some teens will love the movie and others will find it ‘young’ for them. As I always say, you are the best judge of whether or not this is a movie for your particular child or teen. My 12 year old daughter loved it and cried during the movie. I need to add that this movie will also appreciated by the nostalgic among us 😉 Timeless on Netflix: A Bingeworthy Show Our WHOLE Family Can Agree On!