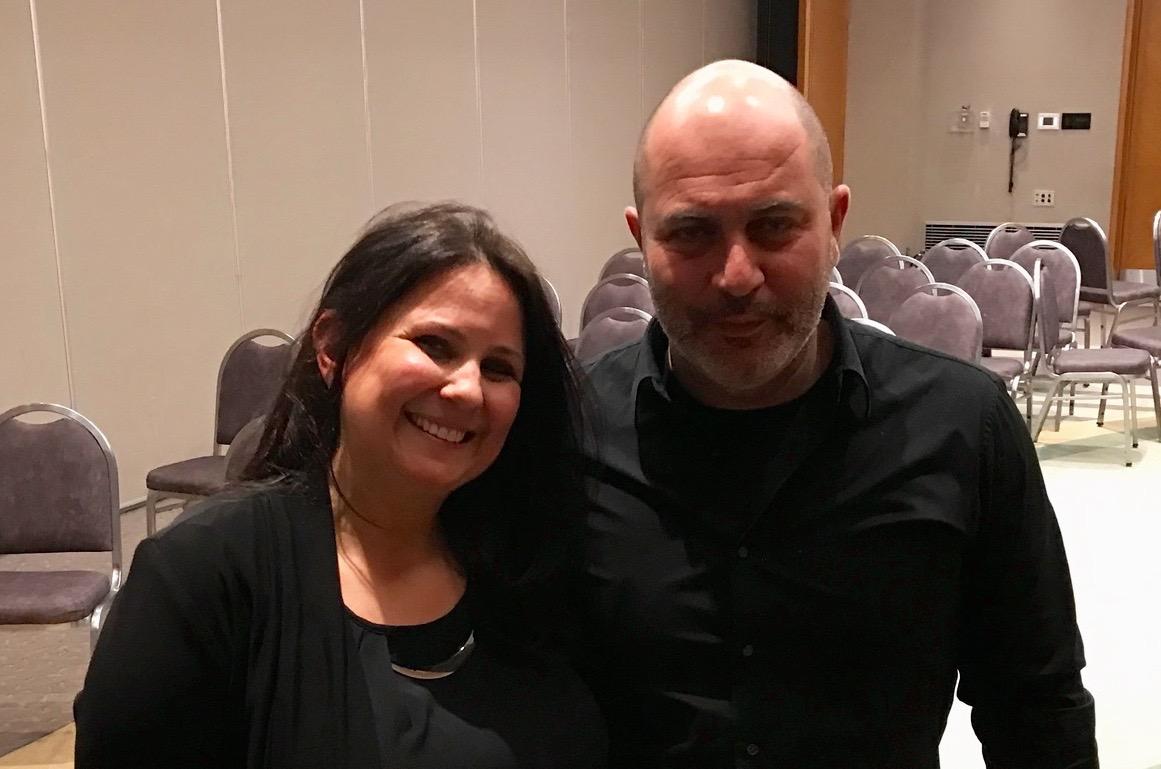 Last night I had the privilege of sitting down for an interview with Lior Raz, visionary, co-creator & star of the Netflix series FAUDA.

When I first heard that Lior was going to be in town for a Federation CJA event, I instantaneously knew that not only did I want to attend, but I was hoping to have the chance to interview him. As a fan of both FAUDA and Federation CJA and as a proud member of the Netflix #StreamTeam, how could I NOT find a way to meet with him, if only for a few moments?

Lior addressed a sold-out Theatre St Denis on Monday night in English, as well as a full house at the Gelber Conference Centre last night, in Hebrew, and I was able to sit with him for a few minutes before last night’s event. 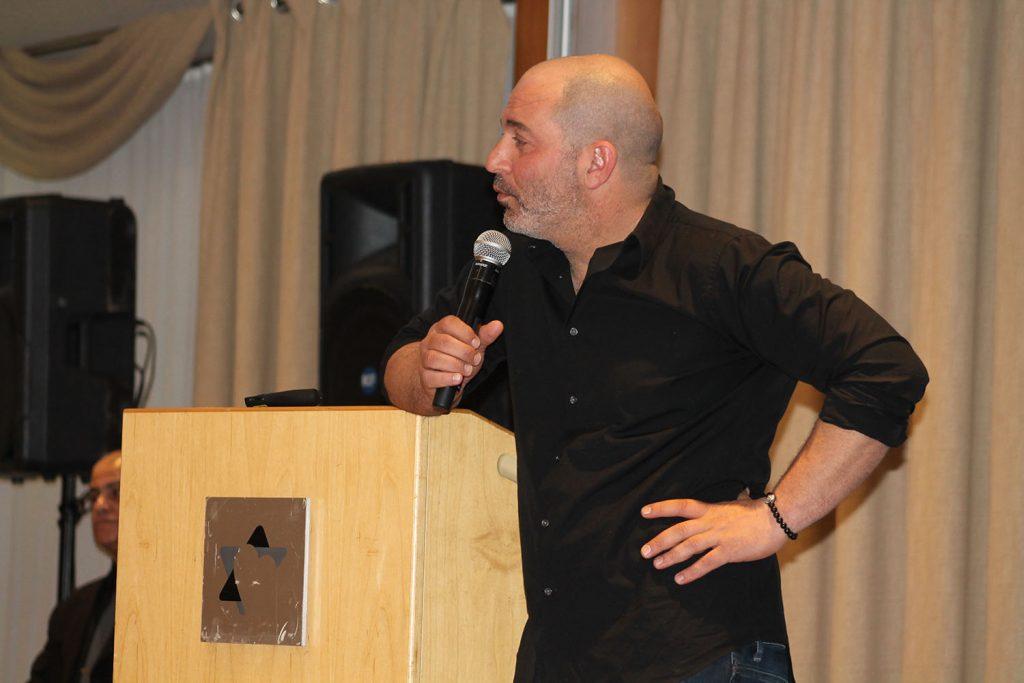 Lior used to be part of the Israeli Special Forces and one day, he was asked if he had a dream. He replied that he’d like to create a series about the life that he and his fellow unit members lived, but that also portrayed what the Palestinians were living on the other side. He wanted to show how living in this war zone affects both sides and that how even the most notorious terrorist could also be a loving husband. He similarly wanted to depict that those perceived to be the heroes trying to do good can also do unthinkable things. Overall, he wanted to portray the human cost- not just in terms of lives lost, but the emotional and psychological toll that war takes on operatives, victims and their loved ones…on both sides.

Of that dream, FAUDA was born.

The series is filmed entirely in Hebrew AND Arabic (with English subtitles for Netflix) and is a smash-hit with both Israelis and Arabs alike. Lior credits the success in large part to the fact that the series is in both languages and the fact that it portrays the humanity on both sides of the conflict.

When I sat down with Lior, I obviously had A LOT of questions, but he immediately asked me for the ‘unique ones’, so rather than ask him the usual, I went for some less ‘mainstream’ questions:

Tanya: When I travelled to Israel with my family 3 years ago, I was really struck by the camaraderie between Israeli Jews & Arabs.  Do you think that it is a popular misconception that somehow Israeli Jews &Arabs cannot get along, and if so what are your thoughts on it?

Lior: I think that Arab Israelis and Jewish Israelis can live together – we’re living together, you know – and we’re very good friends. When we created the show, half of the actors are Arab Israelis and it was amazing the way that we worked together.  We were arguing from time to time but it’s OK, and actually, I think they have a prosperity in Israel, and they have education, they have university, they have medicare, they have social security, they have everything. I (also) think that Arab Israelis are in a bad situation because on one side, the Palestinians think that they are traitors, and also the Israeilis also think that they are traitors so it’s very hard to make this gap much more narrow.  But this is the gap, and I think that when the Israelis will decide to learn Arabic and to talk Arabic, it will be much more easy. Because for me, I know Arabic and I’m speaking it with my friends and they want to talk, because someone understands them, and understands their language and their culture so I think their is a hope.

Tanya: I’m not sure if you heard that today there were bomb threats at Concordia University?

Tanya: What are your thoughts when you hear about something like that happening here?

Lior: I think that Israel is not unique anymore, you know, I think the terror threats are all over the world.  It’s not just in Israel, it’s in Brussels, in Germany, in London, in the US, in Quebec, and people now are facing a new generation of extreme terror that is getting into Europe and getting into the Western countries all over the world. So I think that it’s going to be much worse.

Tanya: Do you have a thought on the fact that recently what we’ve been seeing in Quebec, a lot of the threats –  there was actually a shooting in a mosque – are actually targeting Muslims, which is actually something that is a little bit ‘newer’, something that we haven’t seen before here. What are your thoughts?

Lior: I think it’s awful.  I think that when people are afraid of the other side, they are acting in extreme ways, and terror is one of these extreme ways, and I think that if people will start to know each other, it will be much better. Terror is terror- it doesn’t matter if it against Muslims, Jews or Christians.

Tanya: How important do you feel it is that Jewish teenagers learn about Israel and speak about Israel?

Lior: I think it’s important. I think the young people who come to Israel and understand how Israel is, and they talk about it abroad, it’s amazing. I think that just people who were there understand and know that it’s not such a bad place, it’s an amazing place, it’s very educated, very western, high-tech, movies, TV, culture, it’s amazing,  so I think the best ambassadors are young Jewish people who are coming in and realize that life in Israel is amazing.

Tanya: Tell me a little bit about family life and how it affects what you do.

Lior:  I have 3 kids and a wife, an amazing family….You know the story of Jacob’s ladder? So if I’m taking this story, I’m now climbing on the ladder, and my wife,  she’s holding the ladder…that’s how I feel. 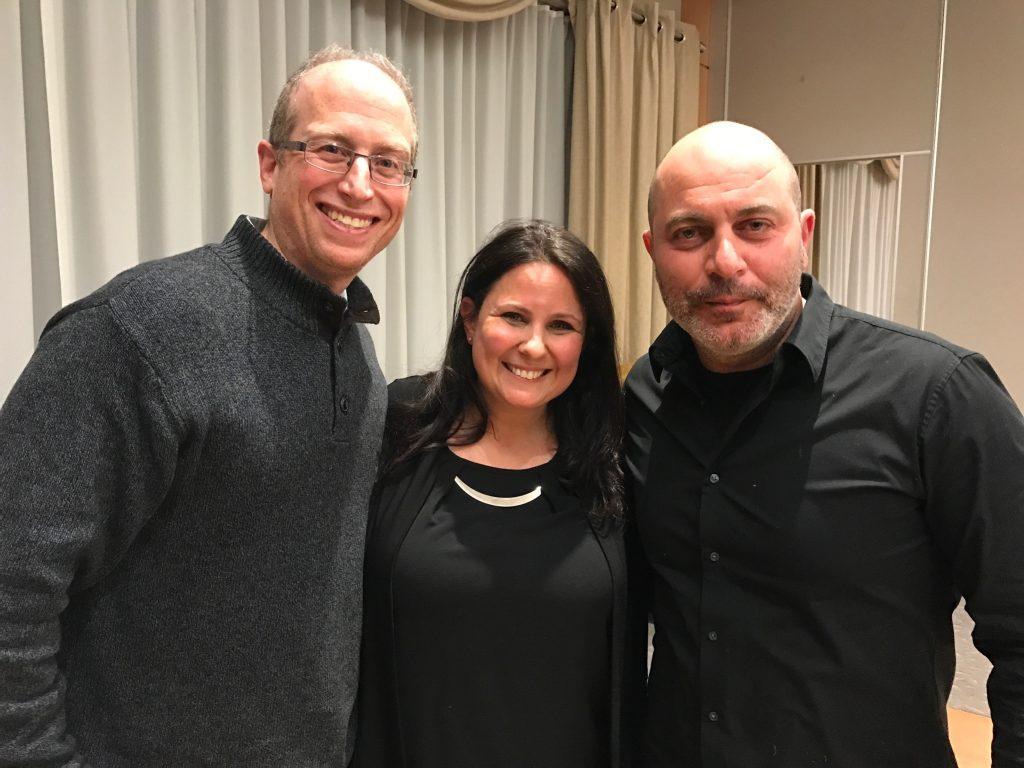 My hubby, Lior & I. As I explained to Lior post-interview: “He Holds up my ladder” 😉

Tanya: Last Question. If you could send one message to the entire world about the Israeli-Palestinian conflict, what would that message be?

Lior: Wow. (He pauses for a brief moment and then the alarm on his phone rings, signalling that our time is up. He could have been ‘saved by the bell’, especially given that a crowd of people were waiting for him in the next room, but instead of shying away, he decides to continue…) Message…Wow. Try to be optimistic.  Talk to each other and maybe we’ll find out that the enemy is not so awful as we thought.

The word FAUDA means chaos in Arabic, and if you have seen the show, then you know that it is a most appropriate title.

It occurred to me this morning that when we think biblically of the beginning of time, we think that the universe was in a state of chaos…and the first thing that G-d created was light, and after seeing that it was good, he separated the light and the darkness.

For those of you who don’t know Hebrew- the meaning of Lior is “I have a light” or “light for me”.

Well, I couldn’t help but think to myself that Lior’s creation of FAUDA is shedding light on both sides of the chaos. From FAUDA (chaos), there is light….

It then sparked the question: What is the meaning of Raz? It means secret. While it’s kind of cool that a former Special Forces operative carries a name that means secret…I see it kind of differently.

You see, “Lior Raz” translates loosely to ‘I have a secret light’.

Imagine that Lior’s openness to embracing language and culture, with his desire to portray how it feels to be on either side of this never-ending conflict, and his ability to communicate it to the world, may actually be touching upon a ‘secret of enlightenment’ of sorts, perhaps the beginning of finding the secret to separating the light from the darkness in the FAUDA that is the conflict in the middle east.

And that’s just with Season 1.

Season 2 is scheduled to be released in November 😉

Wishing you a day where you find light in the chaos,

PS – If you haven’t seen it yet, the binge-worthy Season 1 of FAUDA is available for streaming on Netflix in its original form of Arabic & Hebrew with English subtitles – or – with English voice-over. I highly recommend the former to get its full effect 🙂 What Did You Stream in 2017? Canadian Netflix Fun Facts ;) Confession: I Never Saw The Godfather Trilogy… but now I can – on Netflix. Wonderful post, Tanya! What a fantastic moment to be able to speak with Lior Raz! Congrats on a wonderful interview!

Wonderful interview. So many great insights. Now I want to watch the Netflix series to see Lior Raz at work.

i’m Up to episode 2 of season two. Been binging for the last three days. I love this show. The acting is superb, the storytelling great. & the current history lesson ‘quality.’ I love Mr. Raz. Thank you.