Once upon a time on a day back in April, I found myself in somewhat of a crabby mood.  I knew where it was coming from and it wasn’t PMS.  It was because I wasn’t going to the Mom 2.0 Summit and I kept being reminded of this by the multitude of tweets I had been seeing over the last few days.  In an attempt to be positive and look forward, I started to look for other conferences that I might attend.

On one of the mornings of the Summit, I checked into Hootsuite  and saw more tweets about Mom 2.0.  In an effort to self-soothe, I suppose, I took a quick look at that list of upcoming conferences, again.  I kept coming back to BlogHer in San Diego for some reason (brand recognition, perhaps?)

I walked down to the kitchen that morning and made an announcement: “I think I may go to San Diego this summer”.  They all looked up, incredulous.  My kids started to fuss and tell me not to go.  I told them to calm down, that it was all the way in August and that it would only be for a couple of days.  Of all of the reactions, my son’s comment deserves honourable mention: “But Mommy, it’s like the song: A day without you is like a year without rain!”   Wow.  How could I leave them?  But I was still thinking about it.

I watched the flights around the BlogHer travel dates close in and get progressively more expensive but I wasn’t sure if I should go.  Was it really worth the expense?  Could we even afford the expense?  I kept reminding myself that we had points…but points are for family vacations and that meant I was taking away from my family…and so I kept thinking.

Fast-forward to June.  I decided not to go.  There would be other conferences. I felt guilty about the spend, points or not.  I felt guilty and worried about flying without my family.  San Diego was far.  Bottom line: It was easier to give up on this one.  The upcoming Mom 2.0 would be in Florida which was closer in distance and farther away in time. I’d deal with this later. Who even had time to think about it now at the end of the school year and all that comes with it?

One  day in July, I reached out to a friend/colleague for some help on something new that I was trying with the website.  In her reply she said: “Go to BlogHer. Immerse yourself.”  Her words sat with me and after a couple of days, I was READY.  My hubby was extremely supportive, but we were still waiting on the flight. He called me one afternoon ready to book a flight he had found on points. He was ready, but I wasn’t.  Cold feet.

The next day the flight was gone.  My son saw my disappointment and pressed a Toonie into my hand and said “I want you to go because you want to go”.  I hugged and thanked him and told him to hold onto his Toonie. I explained that if Mommy decided to go, that I could still go. G-d bless my son.  I think he saw more clearly than I did how badly I wanted to go. Somehow, I was still struggling.

That evening, Hubby found another flight on his points & I jumped. I’ll be honest, I was still uncertain but I took the Just Do It approach and I jumped.  I leapt.  We booked.

I had jumped off the fence. I was spinning. It had only just begun.  Now choose which speakers I’d hear, to search for the parties I wished to attend. So much to do and plan. OMG, I was going to San Diego!

Then the strangest thing of all happened.  For the next two weeks, I became a different person.  I was a little more confident, a little more daring  and a little more willing to take the bull by the horns.  Just different.  In a good way. Hubby even noticed.

Stranger that the change in me was the fact that more doors were suddenly opening and it seemed that things were falling into my lap. Hubby & I kept commenting: “Ever since we booked BlogHer…”.  Then I had a thought: Were opportunities suddenly presenting themselves or was I just recognizing them more readily?  Maybe a bit of both. I now have a theory that the energy being used during my period of indecisiveness made everything just a little foggier.  Conversely, jumping off the fence and making that decision brought me clarity in so many ways.

So, while I have always thought that it takes clarity to make a good decision, I have a new found appreciation for the clarity that comes naturally when you stop losing energy to indecisiveness.

What’s your take on clarity: chicken or egg?

Get Tested! Talking about Pool Water… Out of the Black and Into the Blue – Part One Taking a Moment for Perspective & Gratitude 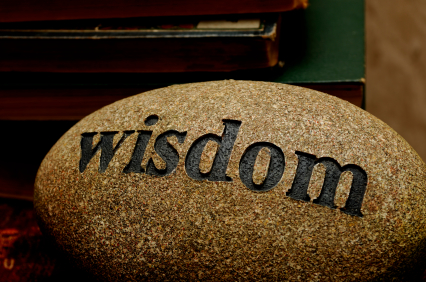 So happy for you that you are going!!! Like you said, often enough we have to “just do it” and the rest falls into place.I’m sure it will be a great experience and great opportunities.

I felt similarly about a recent project. I need to pin down a detail, the indecisiveness was draining and in the way of other decisions – even those unrelated to the project.

Once pinned down, it didn’t matter whether it was the “right” choice. Just that it was set. Now, other things are slipping into place and the best part of all is that I feel settled, confident and excited.

Come August, prepare yourself to travel lightly – not with thoughts of whether you prepared for every possible eventuality your family will encounter back home. Go with your bright mind, open spirit, and newly discovered tech toys.