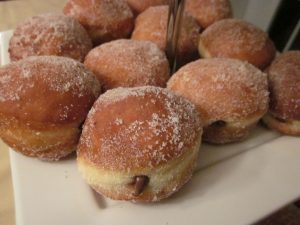 As the holiday season fast approaches, we are already thinking about what to serve for our family celebrations.  This delicious treat will work well at any celebration.  I will point out that they make excellent ‘sufganiyot’ – the doughnuts traditionally served for the holiday of Hanukkah (although traditionally they’d be filled with jam).  I can’t say enough about this non-traditional version. Not only are they beautiful but they are absolutely scrumptious.  My guests just can’t get enough.

As you know, I believe in giving credit where credit is due: I found this FANTABULOUS recipe in a Canadian Living magazine in December of 2007 and it has been our family tradition to make them for Hanukkah ever since. That particular issue still sits on my bookshelf, lest I somehow lose this precious recipe.  Thank you Canadian Living, for adding this non-traditional, traditional treat to my family’s holiday repertoire!

The photo above is my own picture of the recipe brought to life by me… which means that if I can make it, then you can, too!  I will admit that my T-Fal Deep Fryer makes the task and clean-up much easier 😉

I was able to locate the recipe in the Canadian Living site, but before I share I just wanted to add one thing:

BONUS montrealmom.com TIP: The excess bits of dough left over after cutting out the doughnuts can be cut into 3-4″ pieces (they will be oddly shaped, that’s ok), fried,  and then rolled or dipped in Cinnamon Sugar immediately after removing from the hot oil..ADDICTIVE!!! (especially when they’re still warm). To make cinnamon sugar, Combine 3 Tbsp. sugar with 1 tsp. cinnamon.

I’m not generally an advocate of deep-frying, but there are a choice few exceptions and this is definitely one of them!!

UPDATE Dec 2017: There is a new link to the recipe on the Canadian Living website.  I have however noted two typos in the recipe that will affect your preparation of it, so please note that:

Do you have any twists on traditional holiday foods that you’d like to share?  Would love to hear from you!

Have a marvelous day & enjoy! 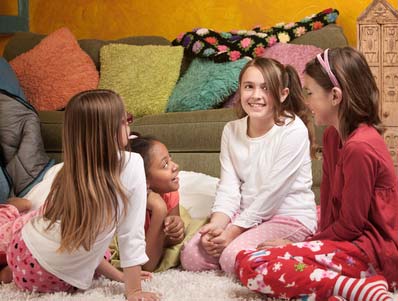 Tanya these look delicious! I am always looking for new recipes for the holidays and I think this one will be a hit!

Thanks so much Patty! Please let me know how they go over… 🙂

Oh boy! Those donuts look deeelicious! Thanks for sharing this.

Thanks Jen! Believe me…it’s not just the look-they TASTE deeelicious! Thanks to Canadian Living for sharing in 2007 🙂

These are dangerous…should I print the recipe? Yes…yes. I must. My in-laws will go crazy for these! Thanks, Tanya!

Thanks for sharing Sophia! (seems link doesn’t link directly to the recipe..any chance you can resend?) Have a wonderful holiday!!!