The Stork: An Over-The-Counter Option While Waiting for IVF 1 in 6 couples in Canada struggle to conceive.

Until now, in Quebec fertility treatments such as In Vitro Fertilization (IVF) and IntraUterine Insemination (IUI) have fallen under the provincial medicare program.  That may be changing very soon.

In addition to the financial burden that comes with fertility treatment, there are timing concerns.  There are wait times to get appointments as well as a year-long waiting (trying) period before a specialist is permitted to begin treatment. 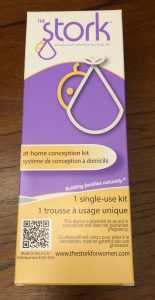 I recently discovered that, depending on the issue that a couple is facing, there is actually an over-the-counter option that couples can try, in the privacy of their own home! It’s called The Stork…and yes it’s approved by Health Canada 🙂

Of course I was sceptical when I first heard about it, but the more I understood about how it works, the more impressed I became with the product.

I think that for many couples, it can be a first step before beginning Assisted Reproductive Treatments (ART).

Based on cervical cap insemination, which is a well-established technique which has been used by healthcare professionals for decades, and has a recorded success rate of 10-20%, comparable with that of IUI (10-21%).

Here’s how it works:

Because The Stork brings the sperm closer to the cervix, it can be helpful in conceiving when the issue is: 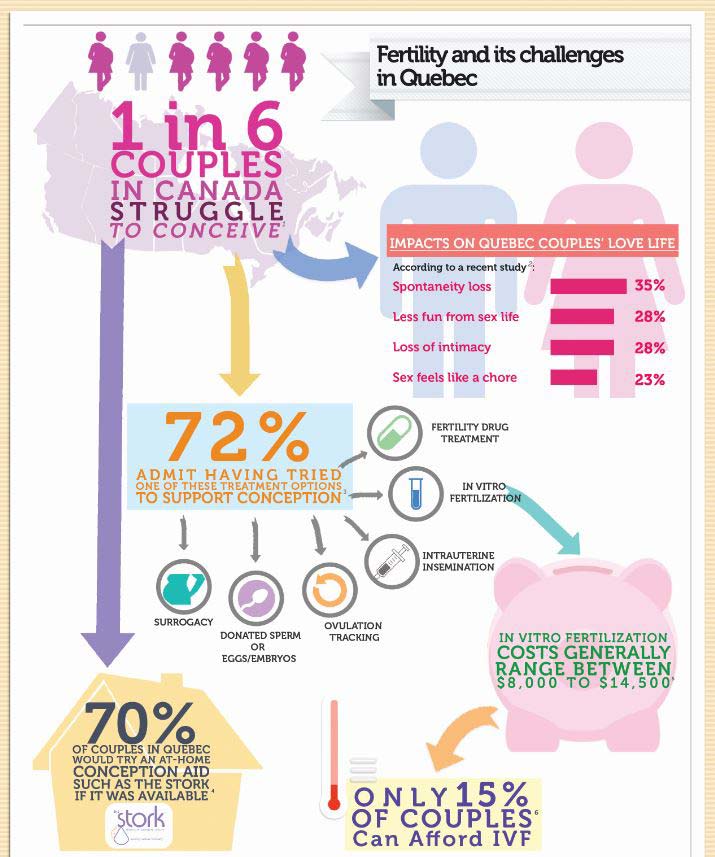 The infographic above illustrates the results of a Leger Marketing Infertility Study, together with some statistics from the Government of Canada as well as The Infertility Awareness Association of Canada.

It is clear that fertility issues can affect a couple’s love life, their pocket book and that most couples are willing to try some way to increase their chances of conceiving.

The way I see it, The Stork is an option that can bridge the gap between natural intercourse and ART. What I think is most appealing is that it is:

Because the The Stork can be used in the privacy of your own home, without medical intervention, it may be worthwhile trying during that “waiting period”.

It may also be an option for couples with no known issues who feel the clock ticking and are hoping to conceive sooner rather than later.

The Stork can be purchased over-the-counter without a prescription, but ask your pharmacist as they actually keep it behind the counter. To find out where to buy The Stork, click here.

Since becoming aware of The Stork, I have discussed it with several friends who were also intrigued but sceptical.  When I showed them the “How it Works” section on The Stork’s website, the reaction was the same across the board:

If you want to see that page, simply click here (Scroll down to see the steps).

Should you wish to see a step-by-step video, I am including one below as well:

As with any medical issues, if you are dealing with infertility, it is important to speak with your medical practitioner. That said, The Stork may very well be an appropriate option for you (or someone you know!) and you know what they say about The Stork…

Wishing you a day of positive results 🙂

P.S. If you try (or have tried) The Stork and would like to share your experience, I would love to hear from you! What to Expect When Baby is Here

where can you buy this in Canada