Earlier this week, I had the pleasure of attending a press conference held at the Canada Wide Science Festival (exhibits remain open for public viewing until noon today).  It is being held at McGill University (Tomlinson Fieldhouse).

CWSF brings together tomorrow’s scientists — the top 500 finalists from over 100 regional science fairs across the country to showcase their projects and share their knowledge in the fields of science, technology, engineering and mathematics (STEM). 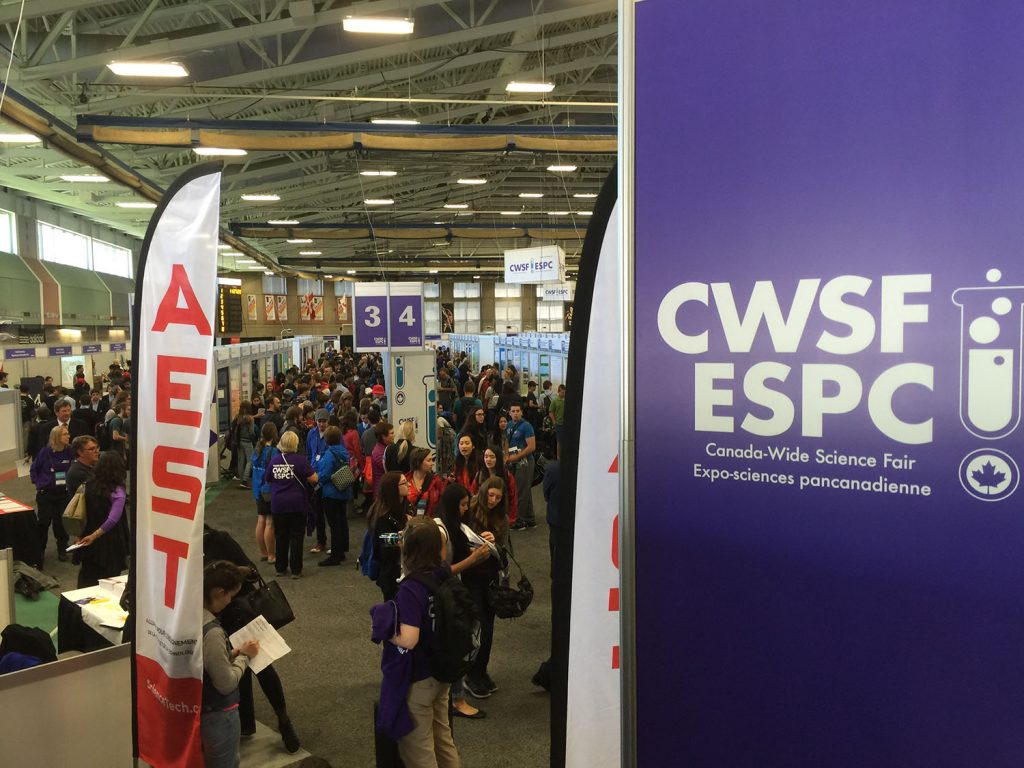 When I arrived on Wednesday morning, I had just missed Col Chris Hadfield, (as in THE Chris Hadfield, Astronaut) playing guitar & singing “Ground Control to Major Tom” to an auditorium full of students. Goosebumps just thinking about it…I can only imagine if I had been there to experience it…

We heard from several speakers, including neurosurgeon Sami Obaid who credits his participation in CWSF for the journey he’s taken to where he is today.

Col. Hadfield made himself available for questions and I had the privilege of asking one.  Forgive me if I was a little less eloquent than usual…Although I am not one to get star-struck, if it’s going to happen, I guess it’s approproate that it be with a star-dusted CANADIAN Astronaut. #Respect.

So true and an important message for living life- not only related to scienctific experiments.  I hope that you’ll share it with your kids and remind them not to be discouraged when they feel the’ve hit a brick wall.

One reporter asked, on behalf of a student “Zoe” “Is there anything left to invent or discover”? Col Hadfield’s response:

“…We don’t even know what 94% of the universe is even made of, let alone know what we’re doing….There are so many problems that we need to solve and we’re counting on scientists, engineers, and bright young people like you and like people right across the country and around the world to solve those problems so, there’s a whole world of things to discover and learn from and improve the quality of life”

There are so many other inspiring things that Colonel Hadfield had to say, and throughout all the questions, asked by both English & French media, Col. Hadfield’s messages were loud and clear-

With that in mind, let’s all remember that even when we are SO busy, and would pay some serious money to have our kids to stop asking so many questions, it’s those questions and the curiosity that breeds those questions that will help them develop onto the world-shapers that they are destined to become.

Reach for the stars kids…you may even surpass them 🙂

How Can I Support My Kids Through Exam Period? (Breakfast Television) BOUKILI: Learning to Read French FREE APP for Ages 4 & Up (Many levels) My AeroGarden – See How Much it Grew in Just 25 days! This Mother’s Day…STAY IN for Dinner! {Breakfast Television} How Can I Support My Kids Through Exam Period? (Breakfast Television)